I have been waiting until I find the right words before posting anything about the week we have just endured. I’m still waiting, I’m worried that I have lost the ability to transfer thoughts to words as I’m just a swirl of emotions contained in a human exterior. So now I’m just going to write and let whatever comes out come. If it makes no sense, forgive me.

Early in the morning of Monday 12th July The Schmoo burst into our bedroom, awoken by the hail of gunfire, screaming, loud bangs, running footsteps and, later on, sirens, that suddenly erupted from our little shopping center down the road. Although it’s 500m away as the crow flies, our house is perched on a hill and the acoustics through the valley meant that it sounded like there was a war going on in our lounge! For the first time in my whole life, I felt true, pure fear. We had absolutely no idea what was going on, but as we huddled together in our bedroom, we knew with absolute certainty that this night would be our last. How The Guy and Lulu-Pie slept through the chaos is a mysterious miracle that I’ll forever be grateful for.

When the kids did eventually wake up, they were excited and wanted to know where the fireworks were, confused and disappointed that we wouldn’t take them on our annual Diwali fireworks-hunting drive. With the loud mixer going and a pre-school playlist cranked up loudly we baked and distracted our way through the morning, drowning out the sounds of war with thinly veiled trickery, willing our own anxiety to remain hidden. At about 10:30am deep booming sounds joined the gunfire and sirens. What they were we’ll never know, but we will never forget the sound.

On Tuesday morning we did something that we never dreamed we would do- we evacuated to my Mom’s house whichm being situated in the middle of suburbia, seemed like a more protected option. Thankfully it turned out to have been an unnecessary course of action and we returned in the evening when the threat that we were assured was imminent hadn’t materialised. The approaching looters stopped short of our intersection and began to loot and occasionally set fire to warehouses in the neighbouring industrial area instead. Although they were still far too close for comfort, at this point it wasn’t that we were fearing for our personal safety, we just couldn’t handle the anxiety of trying to force calm in our home for the sake of the children with the sounds or war all around. I still stand by that decision to leave home on that day – if nothing else if gave us a day free of the audible nightmare.

As the hours turned into days, I noticed something strange and concerning: the sound of close-by gunfire, once so terrifying, became ‘normal’, I suppose this is testimony to human resilience. Acknowledged with a casual “here we go again” before returning to our task at hand; we had become numb. In some ways we still are but I think that’s OK, it’s a coping mechanism and it won’t be forever.

There were obviously very low lows, but there were also many highs and, to be honest, it was confusing. How is it possible that, standing at the barricade erected to block entry into our little neighbourhood with heavily armed men in the dead of night in 4 degree weather, I felt more relaxed and calm than I would have lying in my bed? Perhaps the sense of being in some sort of control of my environment was good for me; on the ‘fight or flight’ response scale I have always been a firm ‘fighter’. As many Kwa-Zulu Natalians did, we got to really know our community and it was humbling. We may not share the same views and ideals in the greater scheme of things, but we shared a common goal and it really unified us.

With the panic about a food shortage mounting, I got up early on Wednesday morning and stood in the snaking line to our shop in the hopes of finding some bread and milk, or, failing that, flour or rice… anything really. At this point The Hound’s food had also finished the morning before and although she would have loved it, we simply couldn’t risk sharing our limited food with her as we usually would. And so we stood, and the luxury of social distancing went out the window and strangers became friends. I thank my lucky stars that in those 7.5 hours of waiting I was flanked by a group of positive, interesting, friendly men and women. I even found myself standing with two families who live in our road but whom I had never met! The store managers kept bringing out trolleys of soft drinks for whoever wanted them, a kind unexpected, and deeply appreciated gesture. Whether by the store managers or the armed patrols (including snipers on the roof), we were looked after. Although the topic of conversation naturally meandered back to the current situation from time to time, I was relieved to hear no country-bashing or bitterness. In fact, the only emotions that crept in were sorrow, confusion and compassion. As our little group drew closer to the store and came within sight of the main road our conversations ground to a halt several times when a big, rifle-wielding member of the community’s neighbourhood watch shouted “GET DOWN!!! Make yourself the smallest target that you can!” We were told that this happened whenever scouts for the looters, or even a group of looters themselves, were sighted, however not having seen anything myself I can’t say for sure. Although I left the store with an odd assortment of groceries which did not include bread, flour, rice, or anything else I was hoping to find, I also left with the numbers of new friends and reassurance in my heart.

Despite having an active presence there, I made the early decision to stay off social media – we were living through the trauma, I didn’t want to have it magnified. As a result, I missed so many of the videos, but I don’t mind, I am still fully aware of what happened. In staying away, I was able to contribute to my immediate and greater community in many ways, ways that I probably won’t ever share because, quite honestly, I’m tired of reliving the details of last week in my own mind and because the details don’t really matter in the greater scheme of things. Disappointingly, at a time when people were rallying together and supporting each other most, a few took the opportunity to stand on their soapboxes and berate what they felt were the unacceptable responses of others. Thankfully the resulting outrage quickly put an end to that- whether publicly or privately, everybody played their part, and no response was better or worse than the next. No matter what your instinctual response was, we all did what we had to do, there’s no room for competition in crisis; I’m proud of what my family and I have achieved and overcome. I’m proud of my friends, of my community and I’m proud of my country. We are ALL heroes.

Re-reading this I am acutely aware that this is definitely the mess I feared it would be, but I’ll still post it because I want to remember this time exactly as it is. I’m sure that as time passes, I will come back and edit this to include more detail because, as unsettling as the last week has been, I also don’t want to forget it.

Have you made it this far?! Well done, what a tangle of words!

And the shoes? They were worn by one of my new friends in the shop queue last week. When I arrived in the morning feeling cold, shell shocked and apprehensive I looked down and saw them standing in front of me. I literally stood and wept, I was so moved by these three words – in them I found a message of encouragement and comfort. I’m going to try and track down a pair for myself to always remind me of the comradery that I felt while waiting to buy bread. 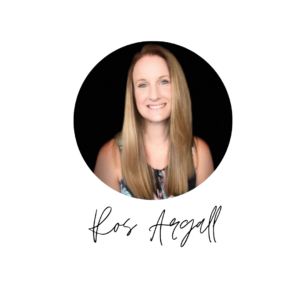 Ros is met her hubby when she was just 20 and they have three, beautiful children. She lives in KZN and calls herself a “wrangler of a herd of humans and a variety of demanding furs” including her boy bunny, Daisy! She loves pretty nails and getting her husband to bring her copious cups of Milo!